Zambian rapper – Kays comes through with the official music video for his track titled “Silver Lining“. The song which is characterized by it’s lyrical content comes as a wake up call to all it’s listeners. It is a track on which Kays showcases his rap skill and also his ability to deliver in various languages.

Silver Lining was produced by Reverb at Levels Studios with visuals directed by The Visual Papi and Kopa Media. 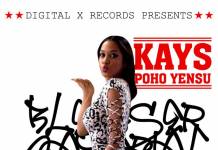