The soundtrack was produced by Ray Dee with the latest music video filmed by RG Professional. Watch below and share. 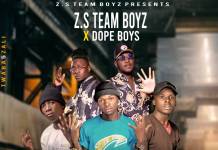